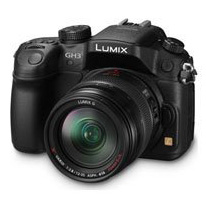 At the end of 2012 I bought a mirrorless camera. It felt like I jumped into the deep end of the pool. I had two choices, sink or swim. With the help of Will Crockett and other hybrid photographers, I have navigated the waters of this new paradigm and I’m now comfortably swimming laps and even doing the occasional back flip.

I’ve gone from a shoulder bending heavy dSLR kit to one that I can carry in a small Think Tank Urban Disguise 30 bag. It holds my Lumix GH3, 12-35mm, 35-100mm, 360L flash, microphone, iPad and even a water bottle and granola bars, if I’m out shooting for the day.

I come from a film background where anything over 400 ISO was not really acceptable to me. With my Canon dSLRs, I followed the same practice and compensated by buying fast lenses or shooting with strobes and in fair weather. I’m now very comfortable using 1600 ISO and higher when needed if I have to freeze the action in a dimly lit location, or when using continuous light sources.

And yes, with some cameras it still does! I have tried to throw off the AWB of the GH3. I started to make a video proving that AWB did suck, but the camera proved me wrong. I had to abort the video. (True story. Ask my assistant.) Most of the time it’s in-camera custom WB for me, and if I can’t measure the light source properly, or the light source isn’t constant (like in arenas) I’ll use AWB.

WiFi connectivity to the iPad beats tethering for client satisfaction.

On my last shoots I transferred my files to the iPad via WiFi within a couple of minutes after each setup to show the models and get client approval. Passing the iPad around, and not tripping over that USB cable was a plus. AND because I pre-processed my files in the camera, the client saw what the final files looked like. I didn’t have to make any excuses like, “Oh, I will be adjusting that one later”.

LED continuous lights are a challenge that can be overcome.

I hated my LED lights when I started using them. But I had to master them if I wanted to have decent looking video blogs. Now I’m using them for photo shoots too. Yes, you need higher ISO, but I’m okay with that with my GH3. Don’t give up on LEDs.

Jpg is the new raw.

I have all but stopped shooting raw files and am now pre-processing my jpg images. That was the hardest shift for me to make as it involved a totally new workflow. As you know, the raw workflow is what I have been teaching my students for the past 10 years. I have learned to trust the Lumix GH3 camera’s built in iDynamic setting and noise reduction capabilities. The file processing that the camera does is better than what I can do, and I don’t have to spend the time in photo editing. My photos match my video clips perfectly in colour and exposure. Plus, I get to take advantage of the built in creative filter effects.

Which camera should you buy?