Superb weather, great neighborhood, and most importantly 50 inspired photographers all made the Calgary Inglewood Photo Walk a huge success! This was was part of Scott Kelby’s official World Wide Photo Walk held on July 24th. There were 1111 walks with over 33,000 photographers taking part this year.

Walkers started gathering around 9:30am at the parking lot at 9th Avenue and 12 Street SE, the main intersection in Inglewood. Not long after there was a vehicle collision at that intersection! Emergency crews were on scene quickly. Luckily no one was injured and it gave the walkers some spot news to photograph while waiting. After everyone arrived, we set up for our group photo and I gave out some route information and parting words. People were itching to get started, so off we all went. We traveled along the main drag and also along residential side streets. I was worried about a group of that size taking over the city sidewalks, but people spread out right away. Within a couple of blocks people were traveling in groups no larger than three!

I spent my time running between the front and back of the pack, ensuring no one missed a turn or got lost, as Inglewood was a new neighborhood for several folks. I also told people they were free to explore back alleys and side streets off the main route, so the group ended up covering a lot of ground.

One hour into the walk, I realized that we weren’t even half way through the route. People were really enjoying all the sights of Inglewood:  the 100-year old architecture, beautiful gardens, colourful houses and weekend yard sales complete with lemonade stands. I started getting a bit anxious about getting behind schedule, because that’s the type of person I am, so I ran over to the Ironwood Stage and Grill, where our after walk lunch was held, and let the staff know we’d be a bit late. After that, I relaxed somewhat, but continued herding the photo cats. You ever tried to herd cats? 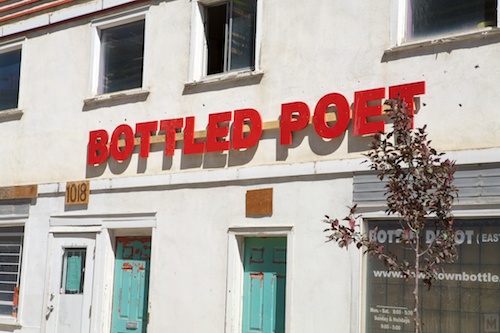 My personal favourite spot along the route was the old bottle depot on 9th Avenue near 10 Street SE. Someone changed the letters around and it’s now the Bottled Poet. I just thought this was very symbolic of the people taking part in the photo walk. In my mind they were all poets.