What is fast glass?

If you’ve read my digital camera buying guide and started researching and shopping for a new camera, you may have come across the term lens speed or heard a sales person say a certain lens was fast.

This post will explain what lens speed is all about. Lenses all have a maximum aperture (also called f/stop). The maximum aperture is the widest opening the lens can have. The wider the lens opening the more light it will let in to the camera sensor (or film). Here is a graphic representing apertures:

The relationship from one aperture to the next is that each aperture value lets in twice as much or half as much light as one next to it.

So what does that have to do with speed?

Lens 2 has a maximum aperture of f/4 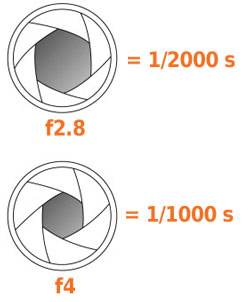 If you’re shooting a sports event and you want to freeze the action, you need to use the fastest shutter speed possible.

You are in a low light situation, perhaps indoors. You don’t want to use flash, so you open up your lens to it’s widest aperture.

So why don’t we all just use fast lenses?

Typically your entry level dSLR camera comes with something like an 18-55mm zoom lens that only opens up to about f/3.5. That’s close to f/4. So not very fast. By the way even really good zoom lenses typically don’t go wider than f/2.8.

Prime lenses, the ones that have just one focal length can go as wide as f/1.2, and some even f/1.0, so really fast!

If you want to work with a faster lens you can usually pick up a plain ole 50mm prime lens with a maximum aperture of f/1.8 for around $100. Sometimes you can even get them used for cheaper. If you have an old film camera kicking around, it probably has a 50mm f/1.8 lens attached to it. That was the old standard. So, have a look at your camera and lens now.

What is your maximum f-stop? Go look for that.

For more information on choosing your next lens, check out this post too.

One last thing of note: If you have an 18-55mm kit lens, you might see something like f/3.5-5.6 printed on the front of the lens. That means at the widest focal length (18mm) you have a maximum aperture of f/3.5 and when the focal length is set at 55mm, your lens only opens up to f/5.6. So it lets in even less light. These are called variable f-stop zoom lenses and they tend to be less expensive than lenses with just one maximum aperture setting. Basically what happens is as you increase your focal length the light reaching the sensor diminishes.

Learning depth of field is next…

Depth of field and bokeh are also controlled by f/stop. Read this post to learn what other things control depth of field.

Bokeh: How to get shallow depth of field, no matter what kind of camera you have